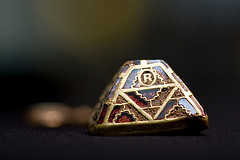 For the first time since 2009, when the Staffordshire Hoard was discovered, all four thousand cleaned and studied pieces have been brought together and organized in one place. As a result, experts have made at least 600 new connections between fragments of broken or incomplete objects. Sword pommels and helmet decorations have been put together like jigsaw puzzles. Many pieces have been grouped by style of decoration, so that pieces probably made by the same jeweller or artisan can be seen together.

Read the illlustrated story of the reunion of all 4,000 pieces in the Daily Mail, published 12 March 2014 with the somewhat breathless title, Anglo-Saxon hoard revealed: 4,000 pieces of stunning handcrafted treasure hint that Beowolf’s [sic] description of ‘golden warriors’ is true.

The treasure dates from about 675 to 725 AD, around the same time period as the Beowulf story. Many of the objects are related to weaponry or items used by warriors. Some historians are now saying that the descriptions of warriors adorned in gold might not have been such an exaggeration after all. 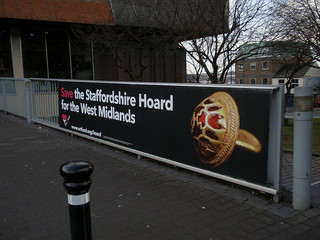 Curiously, a surprising number of objects are twisted and broken, indicating more haste than care in hiding them. A crumpled Christian cross invites speculation about the conflict between old gods and new. No one knows for sure why or how the treasure hoard came to be hidden in the village of Hammerwich. Some say they were buried when the owner was in danger and that he was probably killed, since they were not recovered. Others postulate that they were broken and buried to humiliate a defeated enemy. Notably, many of the gold, silver, and garnet-studded objects were separated or removed from the objects they decorated before being buried.

In any case, the find is truly amazing, valuable beyond price, and stunningly beautiful to behold. Thanks to fund-raising efforts, the collection is together.