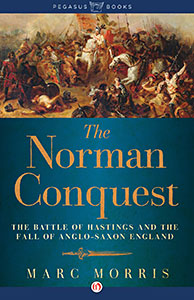 I just grabbed a copy of The Norman Conquest: The Battle of Hastings and the Fall of Anglo-Saxon England by Marc Morris (2013) for next to nothing from a list of Kindle Books Monthly Deals. The book is well reviewed and from what little I’ve read so far this morning, it’s both scholarly and wonderfully written for those, like me, who enjoy popular history.

I have to admit that I tend to zone out, not finish, or skip around in scholarly history tomes, but the author has already drawn me in and I know I’ll read the whole thing with interest and pleasure. The Norman Conquest is a pivotal, watershed event in English history, often written about from a particular viewpoint at great length in spite of (or perhaps because of) uneven and sometimes very sketchy records from the High Middle Ages.

What I hope to take away from this book is a balanced view of what happened leading up to and after the battle, opposed to myths and preconceptions colored by loyalties to an Anglo-Saxon “golden age” or the militarily-superior Normans. And perhaps, the most interesting part of the story is what happened to society in the decades after the battle. Language changed forever, and so did the law, architecture, and daily life.

The Battlefield and the Battle Abbey

On the site of the Battle of Hastings, William the Conqueror established a Benedictine abbey that flourished for 400 years. In 1538, its religious role ended with the supression of the monasteries by King Henry VIII (1509-47), who gave it to Sir Anthony Browne (d. 1548). Browne demolished many of the monestery’s buildings and converted the abbot’s lodgings into his private home. In 1721, Browne’s stately home and estate passed to the Webster family.

Over the next 250 years, the monastic buildings fell into ruin and pieces of the estate were sold off. After World War I, the house was leased to Battle Abbey School, which is still there. In 1976, the government purchased the battlefield and monastic structures from the Websters on behalf of the nation.

Read more and watch a video about the History of 1066 Battle Abbey and Battlefield by The English Heritage organization.

Photos — Battle Abbey at Hastings and the Bayeux Tapestry* 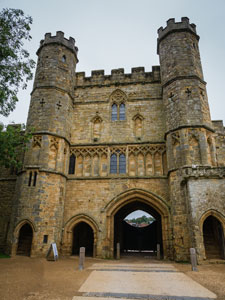 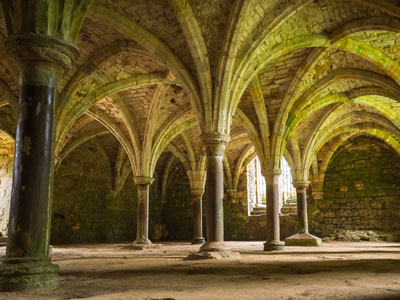 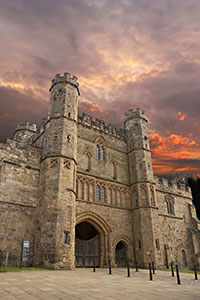 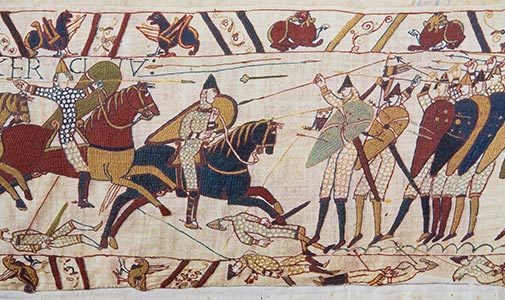 *Stock photos from Depositphotos.com in order of appearance: