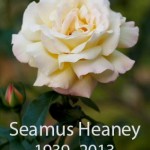 Seamus Heaney passed away August 30 in Dublin, Ireland. An accomplished and beloved poet, Seamus was awarded the Nobel prize for literature in 1995. Most of us discovered him with his translation of Beowulf (2000), which is widely and universally used in English literature courses. He was known as a man of peace, humor, gentleness, […] 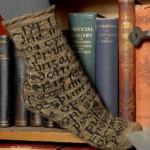 Text from the beginning of Beowulf flows from one sock to the other in this amazing “Hwaet!” pattern from designer Gryphon Corpus at Ravelry.com. They’re knitted in an aged-Medieval-manuscript-brown color with black letters. The creator of these socks knitted a pair for Benjamin Bagby, the contemporary bard who performs Beowulf with Anglo-Saxon harp. Obviously, […]

What we loosely refer to as the “Beowulf Manuscript” is actually a collection of manuscripts bound together by Sir Robert Cotton and known as Cotton Vitellius A XV because of its location in his library. The British Library has published an excellent description of the Manuscript contents that should clear up some of the confusion […]

Seamus Heaney’s popular and accessible translation of Beowulf was published years ago and was a best-seller. Now you can hear Heaney read his translation. He has a very pleasant, expressive voice that makes his translation come to life. Whether you count Beowulf among your favorites or are having a hard time getting into it, the […]