Whether Beowulf was composed in the 8th or the 11th century, it is interesting to compare its themes, language, and style to other epics from pre-Christian Northern Europe. If Kiernan’s research is correct in dating Beowulf as an 11th century composition, it is even more important to be aware of its antecedents in Ireland and Scandinavia.

Introduction to Irish Mythology – An overview by Bard Mythologies.

Irish Literature, Mythology, Folklore, and Drama – A long, organized collection of links from the Luminarium.org website. While not currently maintained, it may still provide some general direction for student research.

Táin Bó Cúalnge (The Cattle Raid of Cooley) is the longest tale in Ulster Cycle Stories, and the most comparable to Beowulf. When searching for materials on this work, be sure to use variant spellings, such as: Tain Bo Culainge, Táin Bó Cúailnge, and Táin Bó Cúalnge, as well as the English translation of the title.

The Fenian Cycle is chronologically between the Ulster Cycle and the Historical Cycle of Irish Literature. The exploits of Fionn mac CumHaill, sometimes called Finn MacCool, and the Fianna also contain battles, but incorporate a lot more romance, tales of reincarnation and the origin of knowledge, along with ventures into the realm of Faery. We’re not talking Tinkerbell here, but a supernatural space with some fearsome beings who make life interesting and dangerous for mortals. 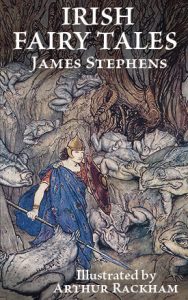 Look inside at Amazon

Fiannaidheacht: The Fenian Cycle – English, Old Irish, and Middle Irish versions of stories in the Cycle. This site is a treasure chest of early and Medieval Irish texts. If you have difficulty viewing manuscript files, download the Unicode fonts from the site’s home page.

Fenian Cycle – Part of the Timeless Myths, Celtic Mythology site, which provides excellent, accessible background information about the Celtic Cycles. The Fenian Cycle is sometimes called the Ossian Cycle, after the warrior-bard Oisín, the son of Fionn mac CumHaill. Oisín traveled to the Otherworld and eventually returned to recount his fantastic tales to Saint Patrick. He is a major figure in The Battle of Gabhra

Irish Fairy Tales – James Stephens’ famous retelling of Fenian and Mongan stories, with Arthur Rackham’s magical illustrations. There are many editions of this book, but this one is a Kindle version with color illustrations from my own copy of the first edition (London, 1920), published in 2010, revised in 2018, with re-scanned images and improved typography.

Neil Gaiman, well-known for American Gods and other mythology-inspired fiction, published this new story of Norse Mythology in February, 2017. That Gaiman is a master storyteller is reflected in many reviews by delighted readers. Informed, witty as always, and entertaining.

In The Legend of Sigurd and Gudrun, J.R.R. Tolkien retells the epic stories of Sigurd the Völsung and The Fall of the Niflungs in English narrative verse. The introduction is drawn from one of J.R.R. Tolkien’s own lectures on Norse literature. Christopher Tolkien provides commentary and notes. This book will appeal to readers familiar with Old English style and hardcore Tolkien fans.