Kennings are found in Old Norse and Old English poetry. The more you look at them, the more elusive their definition becomes. Kennings aren’t just simple metaphors for this and that. They add layers of meaning to words for things that are well-known to people sharing a way of life or culture. 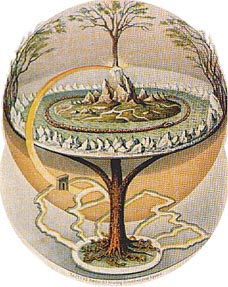 The word ken can mean the extent of your knowledge, or to know. If something is “beyond my ken,” I don’t understand it. The word kenning [cʰɛnːiŋg] in Old Norse means to know or make known. Kenna in Old English is to teach or make known.

The word kenning was adopted into 19th century English from The Prose Edda of Snorri Sturlson (1179-1241), a medieval historian who wrote about the Icelandic sagas and the use of kennings in skaldic poetry. Downloads are available in English translation or Old Icelandic:

Most kennings are highly evocative two-word compounds. For example, whale-road (hron-ráde, whale-road) or heath-stepper (hæð-stapa, hart or deer). You know one when you see or hear one. So, there’s more to kennings than their meaning – they usually have a recognizable structure. Linguists have studied the structure, or morphology, of kennings, even if they haven’t agreed on a definition yet.

The illustration is a drawing of the ash tree, Yggdrasil, by Oluf Olufsen Bagge for the 1847 edition of the Prose Edda. Yggdrasil is mentioned in the books, Gylfaginning and Skáldskaparmál. In Gylfaginning, Chapter 15, Yggdrasil is described as the biggest and best of all trees, with branches that extend over all the world and reach out over the sky. Three of the roots of the tree support it, and these roots also extend very, very far.

The Use of Kennings in Anglo-Saxon Literature. David G. Simpson, South Charleston High School, 1979. A good paper, accessible and well-documented.

Kenning [definition]. The Poetry Archive. Links to a couple of modern poems that incorporate kennings.

Kennings and Other Elements. Pace University. Short, but interesting.

List of Kennings. Examples from Old Norse, Old English, and other sources.

Extra elements in kennings, or “Different ways to feed the wolf single-wordedly.” Ilya Sverdlov. Scholarly paper on a “particular class of ‘extra’ elements in skaldic kennings for man which feature either a heiti for wolf/raven or a subordinated kenning for the same.”

If you are a student of Beowulf, kennings deserve more than cursory attention and simplistic descriptions.