Sir Robert Cotton (1571-1631), collected manuscripts and antiquities. His private library included the Lindisfarne Gospels, two copies of the Magna Carta, the Beowulf manuscript, and other treasures. Cotton and his former teacher, William Camden, founded the Society of Antiquaries around 1586. He was influential in the antiquarian movement of early Stuart England, which sought to investigate the historical origins of the British people. He was also a notable political figure and his career is an interesting study in the relationship between historical scholarship and national politics.

Cotton arranged his Library for convenience, not according to modern cataloging standards. The identity of items in his collection was indicated by the “press” or bookcase in which it was located.

Atop each press stood a bust of a Roman emperor. The Beowulf manuscript was bound in a codex (an early type of book in which manuscripts were bound into book form, rather than rolled up) which is still referenced as Cotton MS.Vitellius A.xv. It was the fifteenth item on the first shelf of the press under the bust of Vitellius in the Cotton Library.

It’s hard to visualize Cotton’s Library, and easy to create an inaccurate picture in one’s imagination. Fortunately, one book has a diagram of Cotton’s Library: Sir Robert Cotton, 1586-1631, by Kevin Sharpe. View at Google Books (no preview) or Amazon (no reviews).

On pages 71-72, there is a description of the library and a simple line drawing (a rectangle with some text) that illustrates its arrangement. I made a similar image based on this illustration (shown below) so that you will have a sense of how Sir Robert Cotton organized his enormously important collection. There is only a bit more information about the Library’s arrangement in Sharpe’s book, which is worth reading for its insights into Cotton’s interesting life and times more than for details about library shelving. 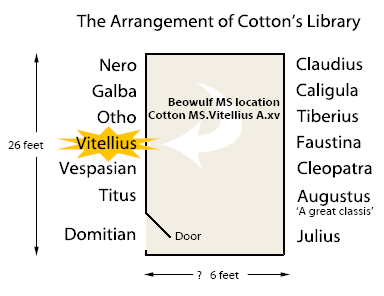 A couple of things leap out at you from this diagram. The library is small by today’s standards, but think of the treasures that would have been forever lost if Cotton had not been an avid collector! The Roman emperors, by the way, are arranged chronologically, from bottom right, counter-clockwise. No, I don’t know why “Julius” is listed under Augustus, the first emperor, or why Cleopatra is represented. Perhaps Sir Robert had a couple extra marble busts sitting around?