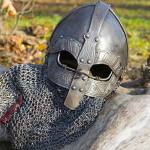 ITV recently announced that it will produce a 13-episode series of Beowulf, about “courage, greed, betrayal, revenge, loyalty, power, man versus wilderness, and of course, love”. The battles between good and evil, heroes and villains take place in a mythical place named “Shieldlands,” and filmed in County Durham and Northumberland starting in April 2015. James […]

Harvard University officially inaugurated the Dumbarton Oaks Medieval Library on March 3, 2011, with the Beowulf manuscript, a volume containing two manuscripts of secular Latin poetry, and St. Jerome’s Latin translation of the Pentateuch paired with the 17th century Douay-Reims translation. The Medieval Library is meant to fill the gap between the Loeb Classical Library […]

The Illustrated Beowulf by Jake has been restored to this site. The parody provides a student’s perspective on the poem and the project assignment from hell. The result is way too funny to leave out, even though half the students who view it will be too young to remember the "stars" of the retold story. […]

With a little imagination and some furry accessories, you can put together a Beowulf costume for Halloween. There are quite a few websites with information and ideas about Early Medieval Costumes, Viking Resources for the Re-enactor, Ravensgard Clothing, Costuming and Textiles, and Some Clothing of the Middle Ages. For more, check out Google’s directory of Medieval […]