Harvard University officially inaugurated the Dumbarton Oaks Medieval Library on March 3, 2011, with the Beowulf manuscript, a volume containing two manuscripts of secular Latin poetry, and St. Jerome’s Latin translation of the Pentateuch paired with the 17th century Douay-Reims translation. The Medieval Library is meant to fill the gap between the Loeb Classical Library […] 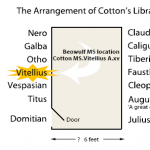 Sir Robert Cotton (1571-1631), collected manuscripts and antiquities. His private library included the Lindisfarne Gospels, two copies of the Magna Carta, the Beowulf manuscript, and other treasures. Cotton and his former teacher, William Camden, founded the Society of Antiquaries around 1586. He was influential in the antiquarian movement of early Stuart England, which sought to […]