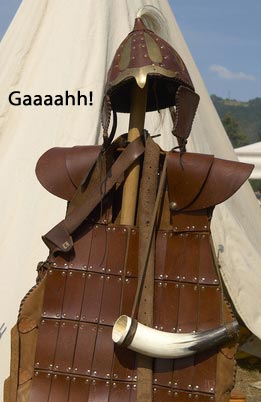 I found this great Celtic warrior outfit on Fotolia while looking at images of Celtic ruins. It’s very well constructed and would be perfect for skewering dragons, charging into battle and yelling “Gaaaahh!” Perhaps it will inspire you to new heights for October’s Halloween revelries and any future Celtic re-enactments you may attend.

The costume’s time period is probably around 1000-1100 A.D., a few hundred years later than Beowulf, but after all this time, it’s the thought that counts, no? The helmet is clearly designed for a “Rider of Rohan,” not a Scandinavian invader. The helmet plus “mask of the invader” combo associated with warriors of Beowulf’s time was meant to look much scarier.