In July 2009, an Englishman with a metal detector, named Terry Herbert, found the largest hoard of Anglo-Saxon gold ever discovered. Treasures of the Staffordshire Hoard are as important as those of the history-making 1939 Sutton Hoo burial mound excavations. A recent reassessment of the find, according to Stoke-on-Trent Musuems [formerly linked page no longer available], has shown that it contains over 3,400 artifacts, not 1500 as first estimated. The objects are made of 5 kilograms of gold and 2.5 kilograms of silver, many inlaid with garnets. 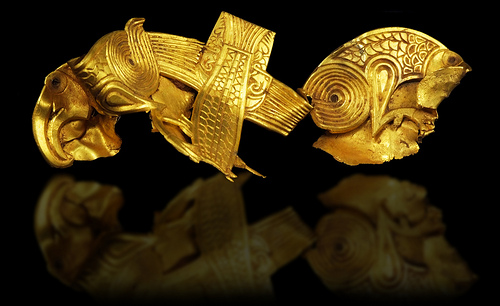 The impact of the Staffordshire Hoard is described by Leslie Webster, former Keeper of Prehistory and Europe at the British Museum:

…this is going to alter our perceptions of Anglo-Saxon England in the seventh and early eighth century as radically, if not more so, as the 1939 Sutton Hoo discoveries did; it will make historians and literary scholars review what their sources tell us, and archaeologists and art-historians rethink the chronology of metalwork and manuscripts; and it will make us all think again about rising (and failing) kingdoms and the expression of regional identities in this period, the complicated transition from paganism to Christianity, the conduct of battle and the nature of fine metalwork production – to name only a few of the many huge issues it raises. Absolutely the metalwork equivalent of finding a new Lindisfarne Gospels or Book of Kells. 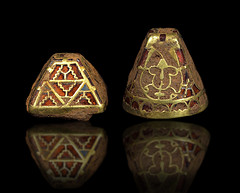 The Staffordshire Hoard website provides information on the progress of cataloging artifacts.

The beauty and workmanship of objects in the Hoard are best seen in two image sets on Flickr: